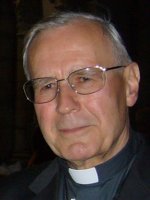 Monsignor Michel Aupetit, Archbishop of Paris, entrusts to your prayer:
Monsignor François Fleischmann
Prelate of Honor, Honorary Canon
who died on Friday, January 26th, 2018,
at the age of 83, in his 56th year of priesthood.
Mgr. Fleischmann returned to the Father’s House at around 11 o’clock this morning.
May God welcome him into his peace.
The funeral will take place at Notre-Dame de Paris, Friday, February 2nd, 2018 at 10am.

François Fleischmann, born in Strasbourg on May 2nd, 1934, was ordained a priest on April 14th, 1962 in the cathedral of Notre-Dame de Paris. He was deputy Chaplain at Lycée Henri IV (Paris 5e) until 1963, and then was a professor at the Little Seminary of Paris at Conflans for eight years.
In 1971, he was named Vicar at Ste-Jeanne de Chantal (Paris 16e) where he remained for four years, while also being in charge, in 1974, for a year, of the religious centre in the Palais des Congrès (Paris, Porte Maillot). In 1975, he became Vicar of Ste-Odile (Paris 17e); in 1981, he was deputy head of St-Pierre de Chaillot, where he looked after catechism at Lycée de L’Assomption Lübeck (Paris 16e).
From 1983 to 1998, he was named to the Secretariat of State at the Vatican for the French-speaking section. This mission in the service of the Holy Father and the universal Church, despite its somewhat austere character, was a source of enlargement and fulfilment for him. The Wednesday audiences enabled him to approach St John Paul II, and significantly marked him.
Upon his return to Paris in 1998, he was named Parish Priest at St-François-Xavier (Paris 7e), an office he occupied until 2003. In 2002, he was named Chancellor of the diocese and episcopal bishop to the office of marriages. In 2010, he began to retire first from his office of Chancellor and then from the office of marriages.  Since then, he resided at Saint-Lambert-de-Vaugirard (Paris 15e), and was able to render numerous services to the parish.
Throughout his ministry, Mgr. François Fleischmann accompanied the Teams of Our Lady and actively participated in the life of the Movement.  He was Spiritual Counsellor to the International Team, another great experience of the life of the universal Church and the action of God’s grace. One consequence of this was that Mgr. Fleischmann became involved in the cause of canonisation of Father Henri Caffarel, founder of the Teams of Our Lady. Last December 8th,  2017 he participated in the Colloquium organised in the Collège des Bernardins upon the occasion of the 70th anniversary of the Charter of Teams and gave a speech about the L’Anneau d’Or, a magazine for which he had furnished very detailed work in preceding years.
In 2003, he was named Titular Canon of Notre-Dame de Paris. In 2005, he was elected to be the Dean of the Titular Canons. In 2013, although retired, he was in the service of the parish of St-Lambert de Vaugirard (Paris 15e). In 2014, he became Emeritus Titular Canon.
Father François Fleischmann was a man of great humility and great depth, devoted to the mission for all in a single Church.  Our prayers accompany him so that God welcomes his faithful servant into his joy and peace. And we give thanks to God for the fruits of his ministry.

Testimonials are flooding in, and we would like to share with you particularly that of Father José Jacinto Ferreira de Farias, scj, Spiritual Counsellor to the International Leading Team.

In Memory of Monsignor Fleischmann

From the first moment I met Monsignor Fleischmann, I was touched by his simplicity, the depth of his gaze and the finesse of his heart. His curriculum vitae shows his commitment to the Teams of Our Lady, a Movement that he served at the highest level, as Spiritual Counsellor to the International Leading Team. Indeed, he was my predecessor in this service.  For that reason, I had great respect and was full of admiration for him because, through him, I felt myself to be the heir to the charismatic richness of our Movement, that he knew more deeply than anyone and that he had obtained directly from Father Caffarel.  The mass at Massabielle, last December 10th, was my last memory of him.  As Spiritual Counsellor of the International Leading Team, the presidency of the mass was entrusted to me, while Monsignor Fleischmann gave the homely.  As I was saying goodbye to him, I said “Adeus,” which in Portuguese means “until (we meet again in) God.” Never were these words so true in the most profound meaning of the communion of saints.  Our next meeting will indeed be in God! Until we see each other again, Monsignor Fleischmann!